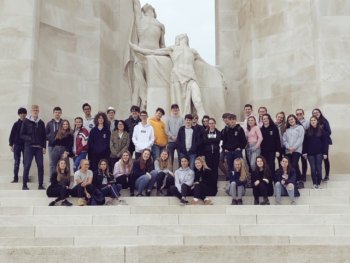 After arriving at school at midnight, we set off on our journey.  Apart from a quick stop at 2am we drove through the night to the ferry which was a very smooth crossing; the only struggle being staying awake!

When we reached Belgium our first stop was Caterpillar Crater and Hill 60 where we experienced how close the two different front lines were as well as learning about tunnelling and the use of canaries during the war. Next we visited Sanctuary Wood where, as well as looking around museums and artefacts, we got to experience being in trenches ourselves.  They were very muddy but nothing compared to what it really would have been like for the soldiers. After this we visited Hooge Crater where we explored a museum and listened to a talk about medicine during the war. After lunch we visited Passchendaele memorial museum to experience both British and German trenches and dug outs. Next we visited Tyne Cot cemetery (the largest British cemetery) where our guide told us about the stone of remembrance and the cross of sacrifice which appear at every British cemetery. It was very emotional to see the amount of soldiers there and especially the amount whose bodies have never been found. Straight after this we visited one of four German cemeteries where it was very cramped with lots of mass graves; a start contrast to Tyne Cot. It had been an extremely long and exhausting day so we were all very glad to go to the hotel and have a very welcoming three course meal.

After a lovely breakfast at the hotel we went to Vimy Ridge, the Canadian memorial, where the views were breath taking and many photos were taken. We also learnt about the danger of exploding sheep due to unexploded shells! Next we went to the little village of Arras for a little down time at lunch (some amazing waffles!).  Our next stop was Cabaret-Rouge cemetery followed by Wellington Quarry, which included a tour round a series of underground tunnels that the soldiers travelled through and were based in before the 1st Battle of Arras. We then travelled to the Menin Gate in the town of Ypres. After a lovely dinner we were able to watch the moving ceremony which takes place every evening to commemorate the soldiers who fought in the war. We then had a quick stop at a brilliant chocolate shop which was the perfect end to the day.

We woke up to a very soggy morning but our spirits weren’t dampened. First we visited the Yorkshire trench and dug-out followed by Essex Farm Dressing Station. It was incredible to see how something so simple and small could have been used as an operating theatre. After exploring for a short while we then visited two British cemeteries: Brandhoek New Military and Lijssenthoek. Here we saw a really interesting exhibition about medicine in the war which will be really helpful for our studies. We also saw a grave for a 15-year-old who lied about his age to fight, as well as one of two nurses to have died in the First World War. This was our final stop and we headed back to England. We would like to say a huge thank you to our tour guide Tony and all the teachers who made the trip so memorable. 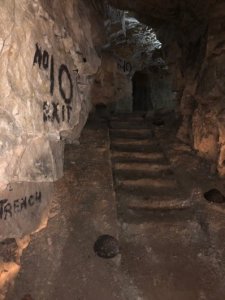