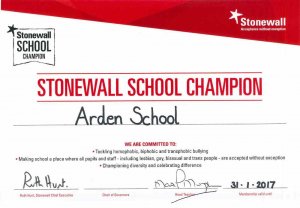 Arden students made a very powerful film in support of the school's anti-homophobia campaign. We have a very strong anti-bullying ethos and this film supports one aspect by illustrating the effect homophobic bullying could potentially have on a student. It is a tremendously moving piece of work and we would like to congratulate all the students who initiated, produced and featured in the film. We are delighted that it recently received recognition at The School Awards organised by the Birmingham Mail in association with the Pallasades, where Arden won 'Class of the Year' for our anti-bullying policies, in particular the Anti-Homophobia campaign and the 'See Say Support' poster and badge.

To view the film, please click on the start button below: