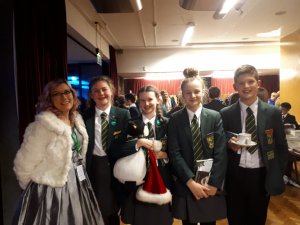 Over two weeks ago, our school team (Joshua Bowley, Bella Heselden-Hamer, Maddie Jennings and myself, Emma Hughes) went to Coventry to compete in a regional round in a competition called the Kids’ Lit Quiz, organised by the librarian, Miss O’Brien. Luckily we won, by a whole seven points! From there, we were invited to take part in the national round of the competition, taking place in London.

On the 4th of December, the Arden Team, Miss O’Brien and Ms Heselden went to the City of London School for Girls (and of course, Pepsi the Penguin the Library Mascot was there with us).

Our journey there was a bit of an experience – due to some tube cancellations and platform changes, we ended up on a tube going the wrong way! Luckily Ms Heselden spotted it and we were able to swap tubes to the right direction and somehow managed to arrive at the school just on time to compete.

Eighteen teams from all over the UK were seated at individual tables, each with a buzzer and a microphone. The quizmaster, Wayne Mills, allowed a trial run, then the quiz commenced. Like the last round, there were categories: characters, book titles and authors. Every time we knew an answer, we had to press the buzzer and, once our school name was called out, we had to answer through the microphone. Unfortunately, our troubles were not over, for - halfway through - the buzzers cut out, resulting in a more anti-tech way of buzzing: putting our hands up.

Like last time, the audience were asked questions and were rewarded with books if they got the right answer.

Despite our best efforts, we did not win and were not invited to compete in the world final in Singapore. The results were: 1st place:  Enniskillen Royal Grammar School, 2nd place: King’s College Junior School and 3rd place: Colfe’s School. We didn’t go home empty-handed, though, for everyone was given a book to go home with and there was a shop we could buy books from as well. We were also invited to the Celebration Tea where we were allowed to get refreshments of juice and even cake! We also were given the opportunity to meet authors including this year’s Carnegie Medal winner, Geraldine McCaughrean. Once we’d all finished, we headed home.

Nonetheless, we did our best and, seeing as we only found out about the quiz barely a week before the regionals, the team did amazing to win the West Midland regionals and take part in the nationals.

Best of luck to next year’s team!