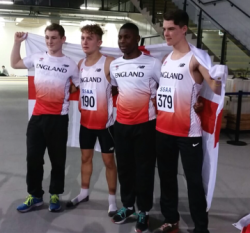 Solihull and Small Heath athlete Henry Thorneywork made his England debut in a home international pentathlon fixture at the Glasgow Emirates Arena.  Henry followed in the footsteps of training partner Reuben Esien to achieve selection for this prestigious event.

The England team beat Scotland by just over 100 points, with Henry finishing in ninth place and achieving a personal best pentathlon score of 2936.  Henry also managed personal bests in the 60m hurdles (9.03), 200m (24.19) and the shot putt (11.73m) to finish off a fantastic season as a junior athlete.

We'd also like to give a special mention to Ashleigh Bailey who finished fifth overall in the English School Pentathlon national finals and therefore missed out on an England place by only 47 points.  She improved her overall points total and is ranked fifth in the UK.