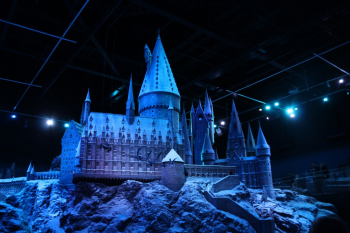 Back in December a group of Year 9 students interested in pursuing a career in the creative arts took a trip to Harry Potter World.  Here is an account of the day from the Costume Design Group:

I remember walking up the path that lead to the studio, all the statues and newspapers that had been significant objects and artefacts in the Harry Potter movies themselves, even including costumes from the Fantastic Beasts franchise!

Walking into the building and finding ourselves surrounded with all sorts of Mesmerising pictures and paintings and sculptures and costumes was amazing.

We were taken into a room and were allowed insight into secrets that people are not usually allowed to know such as how certain materials were made to look the way we see them on screen and being able to put ourselves into the position of some of the people who work on set was really interesting. Also, being allowed to see the costumes the actors and actresses wore, as well as experimenting with the materials their outfits were made from, was an honour. We also got to learn about how they make the costumes for certain characters; this process was very interesting - not to mention we were in the same building as Tom Holland and Zendeya who were working on the new Spiderman movie!

Once our main costume department talk was over we were let loose to go and find out about all the secrets Harry Potter World had in store for us.

We thoroughly enjoyed the walk through the forbidden forest, which came to life with the large Acromantula spiders and Aragog, along with all sorts of mystic beasts that we usually just see on a screen, there was even a moving Hippogriff!

After this, we took a trip down Diagonal Ally, where we were shown the weird and wonderful creation of the Weasley brothers. As we went around the studios we got to take pictures on the brooms. There was even the opportunity to eat butter-beer flavoured ice cream!

After roaming through various different rooms and exploring, we were allowed to tour the gift shop, where we bought all sorts of  clothing and keychains with the four houses and other small pieces that we could take away to cherish the memory of our adventures in the Harry Potter Universe’.